Mark Guarino’s plays have been produced by the Strawdog Theatre, House Theatre of Chicago, Walkabout Theater, the Curious Theater Branch, Chicago Dramatists, Zebra Crossing, among others. He is the recipient of fellowships from the Vermont Studio Center, the Sewanee Writers Conference at the University of the South, and the Byrdcliffe Arts Colony in Woodstock, NY.

Take Me is his second collaboration with Jon Langford following All the Fame of Lofty Deeds at the House Theatre of Chicago. For that production, critics raved:

“There are very few good, serious, enjoyable theater pieces about country music — especially if you nix all those melodramatic Branson and Pigeon Forge homages — and this show could well fill a void in New York and beyond.”
Chris Jones, Chicago Tribune

“All the Fame of Lofty Deeds explores what that means, in all its swaggering ambition and self-destructive complexity. It’s a work befitting a singer-songwriter-artist who has spent his adult life merging art, music and politics. “It’s my curse,” Langford says with a laugh. Guarino’s play makes it a highly entertaining and thought-provoking one.”
Greg Kot, Chicago Tribune

“Playwright/rock journalist Mark Guarino hit on a gold mine of ideas when he partnered with Chicago musician-artist Jon Langford to create this show … There also is hilarity that sometimes sits uncomfortably alongside a palpable sadness … All the Fame of Lofty Deeds works pretty darn well. It’s a show for anyone who loves good music, good art and good storytelling.”
Mary Houlihan, Chicago Sun-Times

Also a journalist, Guarino covers Chicago for the Washington Post, was the Midwest Bureau Chief for the Christian Science Monitor for six years, and his byline has appeared in a wide range of national outlets including Reuters, the Guardian, the Daily Beast, and New York. He holds an MFA from Bennington College in Vermont. His first book is forthcoming from the University of Chicago Press. 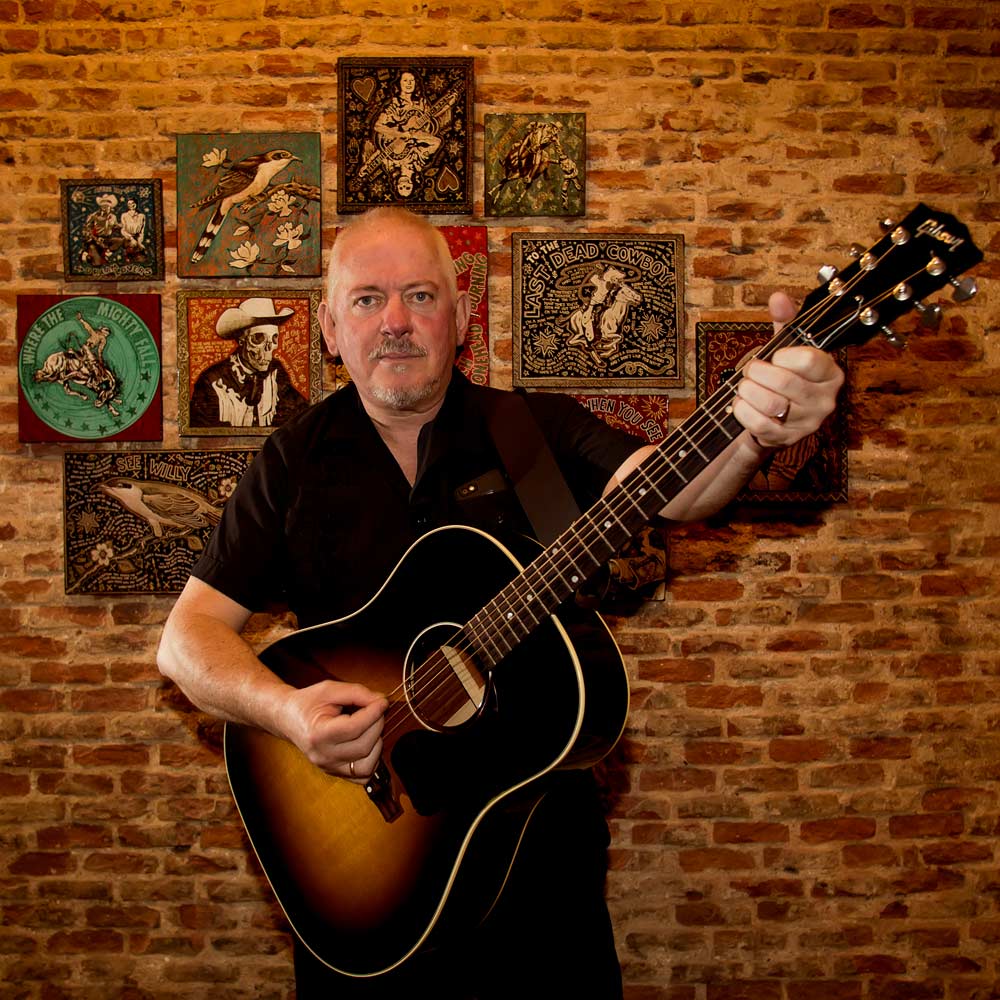 Welsh-born Jon Langford, the original drummer for the punk band the Mekons, stands as a leader in the movement to incorporate folk and country music into punk rock. Langford has released numerous recordings as a solo artist and with other bands, most notably the Waco Brothers, Skull Orchard, Four Lost Souls, The Three Johns, Men of Gwent and The Pine Valley Cosmonauts. Since moving to Chicago, Langford has been active in the music scene nurturing label mates on Bloodshot Records, lending his services as a musician, producer or visual artist, or collaborating with like-minded artists (Dave Alvin, The Sadies, Otis Clay, Bonnie Prince Billy, Steve Earle, Andre Williams, Neko Case).

He first worked with Mark Guarino on All the Fame of Lofty Deeds, their musical given a world premiere by the House Theatre of Chicago in 2009.

Langford is also a prolific and respected visual artist best known for his striking portraits of country music icons. In 2015 Jon was the artist in residence at the Country Music Hall of Fame and Museum in Nashville TN. Nashville Radio, a book of Jon’s artwork and writings was published by Verse Chorus Press in 2006 and was followed in 2011 by Skull Orchard Revisited, a book and CD about his roots in South Wales. The Executioner’s Last Songs, a multimedia music/spoken word/video performance has been performed across the United States, Europe and Australia.

Between 2005 to 2013 Langford was a host of a weekly radio program, “The Eclectic Company,” on Chicago’s WXRT-FM and has been a contributor to NPR’s This American Life.